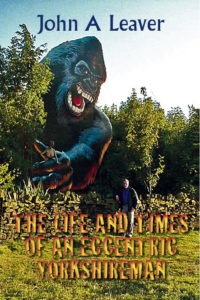 This autobiography captures some of the bizzare and various escapades of a life lived to the full. John A Leaver has been called an eccentric Yorkshireman and the book is a humorous account his life along with his insights on aspects of life and society. There are photographs and Illustrations throughout the book.

They reckon you have to be a famous celebrity, climbed Mount Everest or lived through a war to write an autobiography. Well I haven’t done any of those but I have written a musical, and had it performed on stage, appeared on TV and in national newspapers for various little escapades, and tried to live life to the full. People who know me call me eccentric or a touch bizarre and I have been described as “off the wall”. I have been called worse behind my back no doubt, but for better or worse the contents of this book are a bit of a record of what I’ve been getting up to in the past sixty odd years or so.