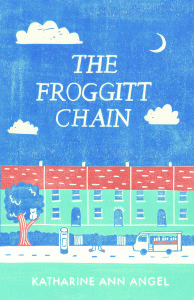 Milkman Peter Froggitt is stressed out of his head and when life overwhelms him he always runs.

Now he is terrified. He heads north on the M6 to escape from the dead woman, the shadowy Watcher on the scrubland, and from his own interminable loneliness. And there’s the heavy gold chain he has carried all his life. The chain he took from The Blackened Man.

At four-thirty a.m. Peter stops his stealth-camper on the hard shoulder. Into a field he chucks a bag full of letters, photos, his mobile phone, and of course, that chain. Free at last, he sings as he recreates himself as a carefree man, ready for a new start.

But from a hotel balcony, overlooking the motorway, the intense and hilarious Hugo Quin is watching.  And when Hugo is watching, anything can happen…

The Froggitt Chain is a story of ordinary people who long to belong.

It is about brokenness and healing and hope.