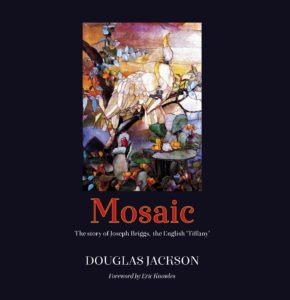 Surprisingly, one of the world’s finest collections of classic Tiffany art glass is not in New York or London or Paris – it’s in the Lancashire mill town of Accrington in North West England.

It’s in Accrington thanks to a man called Joseph Briggs, who sailed off to America in 1891 to seek his fortune, briefly worked in a Wild West show, then joined Tiffany Studios where for a variety of reasons (including a scandal!) he became Tiffany’s right-hand man and ultimately the head of the company. He was also one of the firm’s finest craftsmen, responsible for some of its greatest works.

Briggs’ domestic life was no less remarkable. In 1898 he married an African-American woman whose parents were born as slaves but who was also descended from Scottish nobility.

Sadly, Briggs was forced to wind up the company when art nouveau went out of fashion in the 1930s. But he also sent some the finest examples of Tiffany glass back to Accrington, where today it is finely displayed at the town’s handsome Haworth art gallery.

In this lavishly illustrated book, writer and researcher Douglas Jackson tells the fascinating story of Joseph Briggs, one of the most important – if unrecognised – artists and craftsmen of the art nouveau period. Foreword by Eric Knowles

The resurgence of interest in the artworks of the Tiffany Studios since the 1960s has inspired an exhaustive library of information on the artists, craftsman and designers who were key to its success; all that is, except one – Joseph Briggs, who created or oversaw the creation of many of the firm’s masterworks. Here, finally, is the last piece in the Tiffany mosaic, the long-awaited biography of a modest young Englishman whose artistic skills and leadership qualities earned him Mr Tiffany’s trust and respect through his four decades of employment. Alastair Duncan, art nouveau and art deco author, New York.

Douglas Jackson has delivered a truly illuminating account of people and events that will be of undeniable value to Tiffany scholars and aficionados. I also recognise that this book has been virtually three decades in the making and is a true labour of love that will be a much valued addition to my ever-expanding reference library. Eric Knowles.