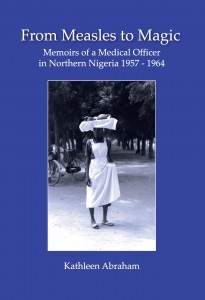 Delving into her memories, and referring to the letters she had sent home to her parents, Kathleen Abraham sets  down  her experiences as a doctor in Northern Nigeria from 1957 until her departure in 1964.

Descriptions of her work in the hospitals of Maiduguri and Katsina and of her medical tours into the bush combine with vivid and often humorous accounts of her day to day life.

It was a world far removed from any she had known before, but one in which she found much happiness, and one that in many ways has now vanished.

“To get to Gorgoram we travelled through what seemed to be totally trackless bush.  No signs of life anywhere.  I decided that instead of using signposts, one had to think something like “Turn off at the third tree on the left, carry on for a bit and then turn right at the clump of thornbush with an old tree trunk just behind it.”  What would happen if any trees were to be felled, I wondered.  I felt as if I was being taken to the ends of the earth and asked myself if we would ever find our way back.”