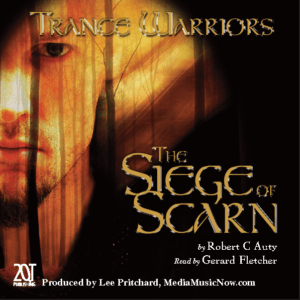 Meet Connor, an outlaw on the run from an evil oppressor for a botched assassination attempt. Like most modern heroes, Connor has a mixture of controlled brutality, deep-rooted integrity and subtle humour. Add a band of diverse individuals, including a dwarf, a loyal warrior and Connor’s love interest – the enigmatic Janice, which help him on his journey, and you’ve got all the ingredients for a thrilling tale. Paul Cave, Author of ‘Cold Light of Day’.

This fantasy fiction book is the first novel by Robert and the first edition was a runner-up in the Spinetinglers Award for Dark Fiction in 2007. With this audio production, both publisher and author set out to create an audiobook that gave the listener a powerful and intense audio experience with the inclusion of sound effects and original music. Working closely with the reader Gerard Fletcher, and producer Lee Pritchard, this audiobook has surpassed all expectations with Gerard’s characterization and dramatization of the story and Lee’s excellent production quality and artistic input.

Not convinced?  Listen to the sample demos below and try before you buy!

The Siege of Scarn – Sample 1

The Siege of Scarn – Sample 2

Robert has the sequel to The Siege of Scarn – Connor’s Folly –  due out March 2010. To read more about Robert and to buy a signed copy of his book you can visit his website on www.trancewarriors.com

Latest news on this title:

‘… Auty skillfully developed the characters in The Siege of Scarn. He gave them depth and dimensions. Auty has developed an unusual warrior, one that readers will love. His companions add great dimension to this tale. I did not want this audio book to end. I can hardly wait to listen to the next book in this series. The plot is well done with enough twists to keep this reader eagerly turning the pages. Auty is a fantastic writer. His words paint a vivid picture. From the moment I began listening to this book I was enthralled. I hope this book is made into a movie; I will be the first one in line at our local box office!’

Reviewed by Anne B. for ReadersFavorite.com

The winners will be announced on the 1st September 2011 so we are hoping for a winning spot.  Part of the prize will be to be featured at their exhibition stand at Miami Book Fair International – not sure whether he’ll be able to attend in person though!