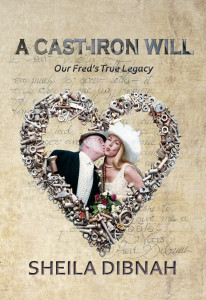 Fearless courage, a passion for ‘mechanicing’  and an open, friendly smile made steeplejack Fred Dibnah a familiar name worldwide. His ability to demolish chimneys and lovingly resurrect vintage machinery was documented in a number of programmes that are still shown regularly on TV.

There was, however, much more to the man than his public image. In her memoir, A Cast-Iron Will, Sheila Dibnah reveals the story of her marriage to Fred. From their first meeting in Bolton to the final, troubled days of her husband’s life when he cut her out of his Will as he lay dying, she presents a moving, funny and sensitive tribute to this great man.

From their first meeting, an enduring friendship developed between the diminutive engineer and the striking, six-foot, blonde ex-showgirl. As that friendship deepened, Sheila discovered the complexities of a seemingly straightforward individual – his insecurities about his lack of education and his humble roots, and the scars he already bore after two failed marriages. Living with a public figure is never easy and Sheila charts the problems that arose as Fred’s profile soared. At the same time, through anecdotes of their time together, she presents a vivid picture of a passionate relationship that transformed both of their lives.

When Sheila’s father suffered a fatal fall and Fred was diagnosed with terminal cancer on the same day, their world began to fall apart…
This is no ‘kiss and tell’ but a genuine tribute to the man that Sheila loved and with whom she hoped to spend the rest of her life. Her words will resonate with anyone who has lost a partner. And to Fred’s fans, it gives a unique and intimate portrait of a truly great man.