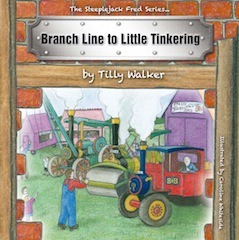 The third book in the Steeplejack Fred Series of Children’s stories, inspired by Fred Dibnah. Fred and his famous road train trundle along to the Little Tinkering steam rally, which this year celebrates the re-opening of the railway station at Little Tinkering and its old branch line. The Vicar asks a favour of Fred and disaster
follows…
A fully illustrated book with the hint of maths and physics for young minds.  54 pages.