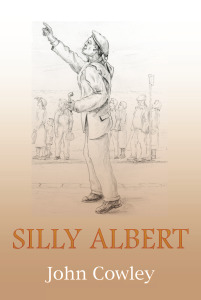 And then there was Albert. Silly Albert. Everybody called him ‘Silly’ Albert. Everybody, that is, bar us. People called him a ‘Nit-Wit’, ‘Imbecile’, ‘Thick’, ‘Daft’, ‘Idiot’, ‘Buffoon’… We never did. We liked him, looked after him, somehow understood that everything wasn’t connected properly, and sympathised. I suppose it was strange in children so young, but that’s how it was…

In a northern town at the end of the Second World War, John, Brian, Tony and JC are inseparable. They roam the streets, filch fruit from orchards, fi sh in the canals and live each day to the full. Following in their wake is Silly Albert, a middle aged man whose eccentricity and inability to communicate set him apart from the rest of society.

To other adults, Silly Albert is someone to be ridiculed and feared in equal measure. To four innocent boys, he is a friend – loyal, sensitive and in need of protection. They form an alliance that, through one memorable year, is marked by joy, laughter, tears and regret. But nothing lasts for ever. As the boys leave behind their childhood, their relationship with Albert changes. In a tragic confrontation with local bullies, they are forced to confront the realities of growing up and to recognise the price people have to pay for being different.

Also available as a Kindle from