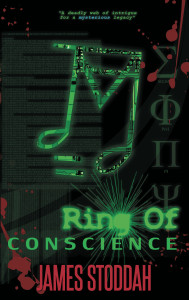 Professor Jason Chadwick, co-developer of the World Wide Web and son of a man who revolutionised casino security in Las Vegas, is found dead in his Cornish mansion. Amy Pearce, his PA, is convinced that he was murdered. All she has to remember him by is his Ring of Conscience, with its ancient Melodema symbol.

Police detectives Thomas Riley and Lucy Bridges discover that Jason left his multi-million pound fortune to anyone who could solve a series of internet clues that explore mythology, ancient history and architectural mysteries. However, a criminal organisation that Jason’s father helped to convict years earlier is monitoring their investigation.

Amy goes missing and Riley and Bridges find themselves under intense pressure to solve Jason’s puzzle. Can they solve the final clues before the hunt turns into a blood-bath…?

‘An ingenious mystery. Well-paced and full of twists. You don’t need to be computer

Ring of Conscience is also an interactive novel. The website in the book exists and is set up so that readers can follow the clues and try to solve the puzzles before the characters do, if they fancy a challenge!

and of course don’t forget www.melodema.com and www.melodema.net to have a go at the hunt yourselves and try and claim your own treasure.