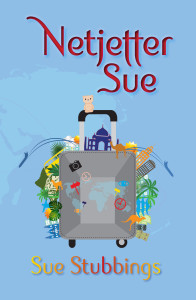 Are you interested in travelling the world and talking to people?
We are looking for three people to take off round the world on a free six-month trip in November ? and be Netjetters.
Just send us 500 words on where you want to go, and why we should pick you.

Sue Stubbings was living in the Fens dreaming of travel when she spotted the advert in the Guardian newspaper. On a whim she entered and much to her amazement found herself in the offices of the Guardian having been selected as one of those three ‘Netjetters’.

Two months later, this rather shy 51 year-old mum, who had never travelled outside of Europe, never travelled alone and never backpacked, set off on the greatest adventure of her life. It was to be a voyage of discovery – not only of the world – but of herself.