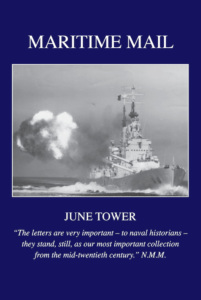 When June Kellet was only 15 she fell in love with a young naval officer and over the next four years they were to live their lives through letters and brief stays, when John had leave ashore. The letters, now held in the archives of the Cairn Library of the National Maritime Museum are considered by the then Curator of Manuscripts as being, ‘… very important – to naval historians – they stand, still, as our most important collection from the mid-twentieth century.’

In this journal June Towers shares with us some of the letters which portray the lives of two young people – a junior naval officer and a schoolgirl of 16 years of age – their every day lives, family and friends, dreams, hope and above all love. The letters contained within the book start in October of 1946 and cover a period of four years  – the final entry being 29th November 1950. They married in April 1950 but married life was short lived as tragedy hit a year later, the day after their first wedding anniversary. June was 20 years old.

There has been much debate about the submarine the HMS Affray – still considered to be one of the Royal Navy’s worst peacetime disasters.