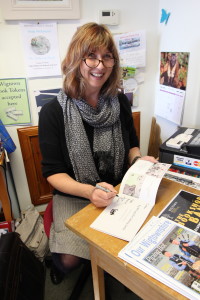 Jayne Baldwin lives near Wigtown, Scotland’s National Booktown in Dumfries and Galloway, south west Scotland. She worked as a newspaper reporter before turning to freelance writing. She writes a weekly column for The Galloway Gazette and is also the Literary Animateur for Wigtownshire. In 2008 she came across the untold story of aviator Elsie Mackay and the first edition of the book was released. Since then she has written three children’s books ‘The Belties of Curleywee Farm’ ‘Big Bill’s Beltie Bairns’ and ‘Maxwell’s Mega Mission’ and become a director of the children’s publishing company Curly Tale Books. Her second non-fiction book, Mary Timney, The Road to the Gallows examined the tragic story behind the last public execution of a woman in Scotland. The revised edition of West Over the Waves has been updated with a new layout and some updated images.

Jayne divides her time between writing, publishing, running the children’s bookshop in Wigtown, and teaching yoga. She lives by the sea in Galloway, and is a director of Curly Tale Books Ltd.

2QT Publications (click on cover to take you to book page) 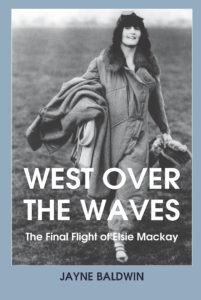