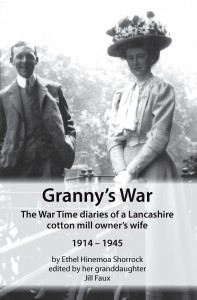 Few housewives wrote diaries during WW1 and fewer still continued throughout WW2. Ethel Shorrock did just that. From a position of privilege and proud of her New Zealand roots, Ethel was a cheer-leader for British Forces.

In 1914 at the outbreak of WW1, she was a young, newly married, wife starting a family. Her husband owned and ran a cotton mill in Darwen, Lancashire. The juxtaposition of entries is often breathtaking, tendering for 10,000 shrouds a week, while commenting on the price of eggs, and provides the reader with a rare insight of the everyday lives of those ‘back home’ during the war period.

By the start of the WW2, Ethel had moved to Morland in Cumbria. The second world war entries are a quiet chronicle of the work of the local ARP; purple, white and yellow alerts, cycling daily to Appleby, being part of a large network of local volunteers and coping with evacuees from Newcastle and long stays by her grandchildren. There are some ‘Dad’s Army’ moments with old Mr. Markham insisting on climbing the church tower to keep watch for aircraft, and the whole village turning out to furnish a cottage for two woman evacuated from Newcastle with Canon Hartley carrying buckets of coal with bombs dropping roundabout and planes coming down.

Drawing on family papers and photographs, Jill Faux, her granddaughter, has fleshed out major events of Ethel’s life to put the diary in the context of the changing family fortunes during the first half of the 20th century.