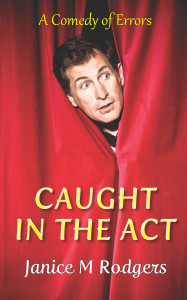 Jack Armstrong is caught between two worlds, in education as an English and Drama teacher and in the world of amateur dramatics. Through no fault of his own, he finds himself trying to produce two plays simultaneously, one that has been imposed on him by his headmaster for the school and another that he has written himself for the local drama festival. Like a comedy of errors, accident prone Jack lurches from one catastrophe to the next with hilarious results, but amidst it all he’s overlooked happenings closer to home – his marriage. Set in the North East of England, Caught in the Act could just as easily be set anywhere in the British Isles where people come together in the name of theatre.