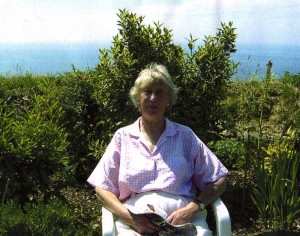 Joyce Stevens first drew breath at the General Lying In Hospital off the Waterloo Road, and it was at this same hospital time some years later that she passed her final Midwifery examination. She trained in midwifery in the West Country after General training in Kent. Duties in the operating theatre and casualty were then enjoyed and after a sad romance there was this urge to travel.

In 1962, first to Gibraltar on a 4 year contract then in 1967 a sea journey and a nursing opportunity at The Matilda and War Memorial Hospital Hong Kong.

Hong Kong was to be her home for the next 26 years. After learning to sail, offshore sailing was her main leisure activity. After participating in many races and the bi annual China Sea Race she was eligible for membership of the Royal Ocean Racing Club. New dimensions were added to her life in 1975. The most important was her marriage in the spring to engineer Eric Smith. They shared the passion of the sea and the Autumn, saw the launch of their sloop ‘Nimrod’ which they sailed every weekend except during typhoons.

Her first 2QT Publication is was a tribute to Pudd’n the cat, rescued from a cardboard box and who was added to the crew in January 1983. Whilst nursing in Hong Kong she researched and had published a book about the hospital and the life of the Victorian lady it was named after, who was resident in Hong Kong 1858 – 1893. October 1975 saw the first Matilda Hospital Sedan Chair Race, the race being her idea and she organized it in aid of Hong Kong Charities for the next 18 years. It continues to this day an over 40 Million HK Dollars has been raised for many deserving causes.  Joyce’s has now published a revised updated section of the original book called Under & Beyond Victoria’s Sway, which focuses on the story of Matilda from a young women to her life in Hong Kong.

After Eric untimely death from Cancer in 1987, Joyce became a keen fundraiser for the promotion for Hospice Care and the building of Hong Kong’s first Hospice. The Bradbury Hospice was openedby HRH Prince Charles in 1992. Retirement beckoned and in 1993 a move to Cawsend, Cornwall and an involvement in village life. Pudd’njoining her after his 6 months quarantine and lived until he was 21years and 6 months.

We live in an age where letter writing has been replaced by text and email. It is easy to forget that in times past, a letter to and from a relative/friend was the only means of communication.

This was emphasised to me after my curiosity about a photograph in a waste paper basket led me on a quest that was to occupy my life in various ways for many years to come. It wasn’t Queen Victoria, as I had thought.

It was the late 1970’s and I was a nursing sister at the Matilda Hospital, Hong Kong. A reply from a Hilary Bridgeman to a letter in the South China Morning Post requesting information about Matilda, put me in touch with Matilda’s great, great nephew Richard Webster and family in Norfolk England, near to where Matilda was born. I was allowed access to Matilda’s copious journals and letters home. Richard shared my conviction that the story of Matilda should be told and, thanks to his generosity and Matilda’s flair as a diarist, much of it is recounted here in her own words. The books covers Matilda’s life in Hong Kong and travels from 1858 onwards until her death in 1893, including her miraculous survival of ordeals that could easily have left a less steadfast character demented.

My research also led me to visit Australia to meet descendants of Matilda’s brother, Abraham who emigrated from England in 1839. In this book, I hope to have given an insight into the lives of this Victorian Family, told in part through their original letters.

In the era in which Matilda and her family lived, they were not classed as aristocrats, nor were they paupers, they would have been classed as ‘Trade’. They were in essence also part of the Empire builders. Through education, travel, hard work and honourable Christian values they were an example that earned respect for themselves and England.