Sum up your book in a few sentences-What is it about? 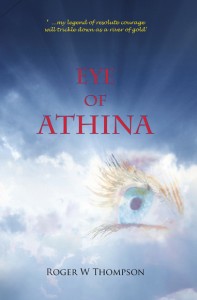 ‘Eye of Athina’ is set on a Greek holiday island in 1994. With the fall of the Berlin wall in ’89 a ripple effect is felt on the islands, with East European mafia money and its influence on the Greek islands. A young female agent is sent by MI6 to investigate the supposed drowning of a fellow agent. During her time there she uncovers gun and drug running and crosses paths with a Romanian hit-man.  Having been born within the city of Athens, she is influenced by a strange bond with the Goddess Athina and blessed with unusual eyes.  Out of this she finds romance!

There’s been quite a bit of speculation about the main character; did she or didn’t she? I’ve already thought of how I might develop that storyline in terms of a twist! I guess you’ll just have to read the book for yourself and see what I’m talking about.

Who are the intended audience?

I didn’t go for any specific audience.  However I’ve had positive feedback from women who have all said they associated themselves with the main female character.

I have always been interested in writing and was told off many times at school for spending more time writing stories than my homework. When I was fifteen I sent comedy scripts to the BBC (Roger tells me he was the youngest person to send them to the BBC at that time!). I had an interview there when I turned sixteen.  The story for Eye of Athina started a few years back when I visited a friend living on this Greek island, mid winter for my sins; I got to know the locals who told me about strange goings on with Russian and Romanian arrivals in the ‘90s, coupled with the drowning of a man who locals reckoned was an English agent. I couldn’t wait to get back and start writing it even though I was in the middle of another story.

How did you go about writing the story?

To have a rough idea, I got the opening line on paper-sorry, the monitor- and from then the story seemed to flow.  What I find exciting is when the story has a life of its own and I wonder where it is taking me.  My other stories do seem to have a strong maverick type of woman as the main character.

What made you look to 2QT publishing?

I belong to the ‘New Writers UK’ and the chair John Baird suggested I try them. I have to say they have been very patient with me, particularly Catherine; she didn’t give up and I learned such a lot from her.

Any advice for anyone contemplating writing/publishing a book?

If it’s what you feel you must do then just do it and surprise yourself! If you are going into it to make money; well you might be lucky, but at the end of the day treat it as a satisfying hobby.  Take the advice of the team and learn from them.

What are you planning on/hoping to do next?

I’m just finishing the story I started before being interrupted by Athina (that woman again!).  Set in 1955 in Manhattan’s Little Italy, it is a cops and mafia story involving Nazi loot from Europe. My research on Google for that period was a joy and I eventually ended up spending a week over there to check my locations. I am a Bogart/ Phillip Marlowe fan so it was fun writing. After discarding two other titles, I’ve called it ‘The Girl on the Bridge’ (that’s Brooklyn Bridge by the way).

Who is your favourite Author?

I think it has to be Patrick O’Brian, author of ‘The Master and Commander’. I’ve read all of his books (and presently reading them again) on Jack Aubrey and even the 21st which he was halfway through when he sadly died. I’m also a fan of Raymond Chandler’s writing-hence Marlowe of course. You might see his influence in my Manhattan story.

‘Eye of Athina’ is now out on e-Book. You can purchase it online from Amazon Kindle store here

Alternatively, buy it in Paperback from our website here